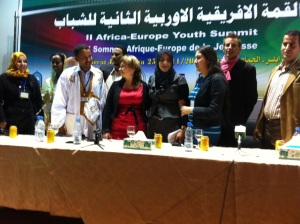 But the organizations expect the same kind of commitment from the Governments, including the support to youth exchange programs allowing 100 000 young Africans and 100 000 young Europeans to participate, seed-funding for pilot projects and investment in entrepreneur and youth friendly environments.

Heavy debate on colonization
The final plenary where the Tripoli Declaration was adopted lasted for many hours, partly due to the challenge of finding an agreement on how to deal with a proposal to demand apologies and compensation for the period of colonization. In the end the delegates agreed to request the Heads of States to discuss this, as it still affects the youth.

Strong institutional presence
The event had strong support from various institutions in Africa and Europe, including the African Union Commission, the European Commission, Belgium as the presidency of the EU, the African Union ECOSOC, the Council of Europe Statutory Bodies and the North South Centre. The event was kindly hosted by the National Organisation of Libyan Youth, a member organisation of the Pan-African Youth Union.

The participants were recruited from the Member Organizations of the European Youth Forum and the Pan-African Youth Union, from ICMYO organizations active in Africa, from the African Diaspora Youth Network in Europe and the Advisory Council on Youth in the Council of Europe.

The International Coordination Meeting of Youth Organizations (ICMYO) is an informal network of membership-based, democratic, representative and accountable International Youth NGOs and Regional Youth Platforms. Our main objective is to strengthen the cooperation of youth organisations at the regional and global levels in order to coordinate policy inputs to the UN and other global youth policy processes. View more posts